Polish among other languages

Position of the Polish language among Slavic

The Polish language belongs to the relatively narrow Slavic (Slav, Slavonic) group of languages. In comparison with the others it has preserved many archaic features. The following languages are the most closely related to Polish:

These languages are named West Slavic.

The other Slavic languages, which are somewhat more distant, are:

If you understand Polish, you can learn more about the Slavs and Slavic languages here.

Position of the Slavic languages among Indo-European

Position of Indo-European among languages of the world

Indo-European languages now compose the most widespread language family of the world. Yet until quite lately they were used only throughout most of Europe and in some areas of Asia. Nowadays in that region we also meet a number of languages which belong to other families: Uralic (Hungarian, Estonian, Finnish, Lappish, Samoyed, maybe also Yukaghir) and Altaic (Turkish, Tatar, Mongolian, Manchu, Korean, Japanese). Some mutual relationship between these two families and with the Indo-European family is possible, but very distant. There are also circumstances which speak for the existence of a language (named Nostratic, from Latin noster ‘our’) many thousands of years ago. Its descendants are the three abovementioned families, as well as a number of the others: Dravidian (used in India, e.g. Brahui, Tamil, Telugu), Kartvelian (= South-Caucasian, e.g. Georgian), and maybe also Afro-Asiatic, Eskimo-Aleut, Chukchi-Kamchatkan, Nivkh (Gilyak). In addition, it has also been suggested lately that Sumerian†, Etruscan† (which is referred as being particularly close to Indo-European), and the Basque language (used in the borderland of Spain and France) are most closely related to the Nostratic languages than initially thought.

The relationship between Indo-European and Afro-Asiatic is the most discussed. Some scholars believe that all 4 large language families (“maximal classes”) of Africa, namely Afro-Asiatic (= Semito-Hamitic, e.g. Arabic, Hebrew, Aramaic, Egyptian†, Kabyle, Somali, Hausa), Nilo-Saharan (ex. Nubian, Songhai, Dinka, Masai, Shilluk, Kanuri), Niger-Kordofanian (e.g. Fulani, Swahili, Zulu, Xhosa) and Khoisan (languages of Bushmen and Hottentots), are more closely related. Specially close relations are between Nilo-Saharan and Niger-Kordofanian – both families form one group which is named Zinj. Some grammatical features of Hamitic, or even Semitic languages, can be found in Zinj languages, e.g. in Fulani, which is affiliated as being a part of the West-Atlantic group of Niger-Congo languages (which are a subgroup of Niger-Kordofanian), and which is thought to be Hamitic in some books. On the Internet, you can find information on (perhaps secondary) similarities between Egyptian and Wolof (a language similar to Fulani, see here, here, and here).

There also exists a view, maybe more justifiable, that the Khoisan languages can be opposed to all the other languages of the world, and the Zinj languages have more common with certain languages of New Guinea and south-eastern Asia than with Afro-Asiatic (see here, here, and here). The observed similarities are explained with secondary influence. The influence arose during the period (ca. 20,000 BC) when the climate conditions were hard and people who used 4 mentioned groups of languages (together with the Shabo languages which has been believed to be isolate) were obliged to live in a refugium in a small part of north-eastern Africa.

Many scholars has been interested in detailed analyses of relationship between distant language families lately. There are theories that all known languages in the world are the descendants of one proto-language which was in use about 100 thousand years ago. Patrick C. Ryan is the author of an interesting trial of reconstruction of that proto-language. He believes however that Semitic and Indo-European are closely related (and he seems to insist on particular Semitic-Germanic relations). Even if he has gathered pretty abundant lexical material on his website, he makes glaring methodological errors (ex. he takes data from Arabic into consideration while ignoring data from other Semitic languages completely, not even speaking on other Afro-Asiatic languages) and that is why we should not consider his hypotheses to be probable.

Prevailing number of scholars who examine the item reject the possibility of close Semitic-Indo-European relation. For instance, on his (not existing now) website, Glen Gordon placed the following diagram of language relations, basing himself mainly on an analysis of morphemes and kinship terms which exist in particular groups:

Due to that scheme, within the Nostratic superfamily, Etruscan (together with Rhaetian) is the most closely related to Indo-European. A little farther relationship is between Indo-European and Altaic, Dravidian and Uralic (as well as Yukaghir and Eskimo-Aleut). All that large group, termed Caspian, is believed to be related to Sumerian. Next family, yet more distantly related to IE, might be Kartvelian. And finally all those families, termed Kartvelo-Eusian, are thought to have common roots with Afro-Asiatic and Aquitanian (Basque). 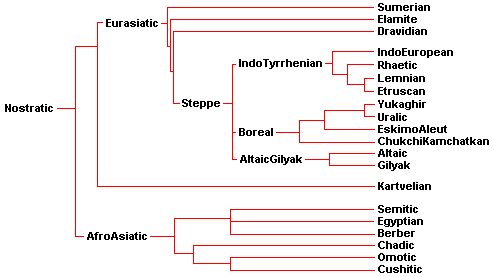 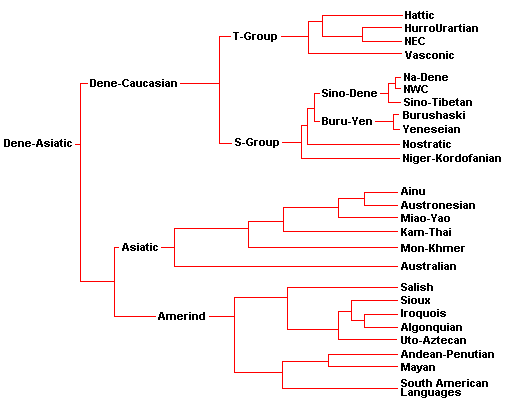 The author takes the hypothesis of the relationship of Na-Dene (one of Amerindian groups) with Abkhaz-Adyghe (North-western Caucasian, NWC) and Sino-Tibetan into account, but he does not mention on other hypotheses of relationship of Amerindian languages and languages of the Old World, namely between Penutian and Uralic (see ex. here), Hokan and Austronesian, Wakash and Altaic or, in more recent Sheveroshkin’s version, Salish and Wakash (of Almosan macrofamily) and Avar-Andi-Tsezian (of NEC). Today NWC and NEC (North-Eastern Caucasian) are considered to be relatively close with almost full certainty, while their relation to Basque cannot be thought to be proved now. According to the newest researches, the extinct Elamite language seems to have intermediate place between Afroasiatic and Nostratic (without the former group), and Elamite-Dravidian connections are said to be secondary. See also other relationship schemes drawn by the author.

Also analyses of A. Starostin and many other scholars looks interesting. You can find them on the website called The Tower of Babel (also here). Its newer, more abundant version, is available here. Basing on the lexical material gathered there, we can draw the following scheme of language relationship: 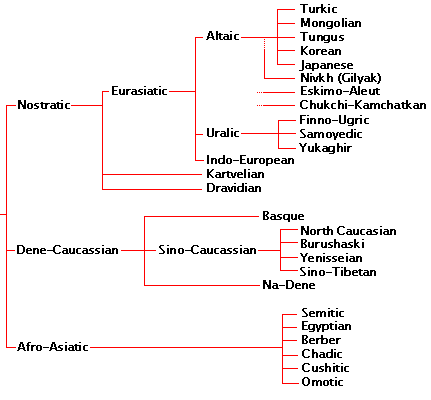 By the authors of The Tower of Babel, Afro-Asiatic languages are not only separated from Indo-European but also they have been cancelled from Nostratic. Now they are a sister group for both Nostratic and Dene-Caucasian. The authors seem to emphasize (at least on the map on the main page of their website) special genetic relationship of Indo-European, Altaic and Uralic (perhaps together with some smaller groups), which are termed in common as Eurasiatic.

And then, if Indo-European and Semitic had a common ancestor, it was in the distant past only. The Indo-European proto-language existed maybe ca. 4000 BC. It has been supposed that the Nostratic commonwealth existed 11–15 thousand years before present, and the Proto-Afro-Caucasian language was even older (see here). At the same time, the common language for all three macrofamilies on the scheme above (so, the common ancestor of Indo-European and Semitic, among others) should have existed ca. 25,000 bp We could call that language Proto-Afro-Caucasian.

The scheme on The Tower of Babel shows yet another approach to both genetic relations and dating of particular language families and protolanguages. According to its author, Proto-Indo-European was in use ca. 5000 BC, Eurasiatic ca. 9000 BC, and Proto-Afro-Asiatic ca. 10,000 BC. The Nostratic language, which existed ca. 13,000 BC, is said to have given birth to Eurasiatic and Afro-Asiatic.